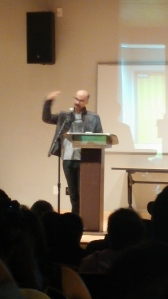 Junot Diaz at the podium during the VONA/Voices faculty reading

Yesterday I attended a really inspiring reading put on by the faculty of the VONA Voices Workshop based at UC Berkeley. Voices of our Nation (VONA) is an organization that provides writing workshops for emerging writers of color.  The distinguished faculty members of the , including renowned writer Junot Díaz and acclaimed poet Patricia Smith, read their own work to an audience comprised of students from the workshop program and members of the community who just wanted to hear from some talented writers.

I heard about the event from my friend’s mom, who knows one of the faculty, Elmaz Abinader. It was my first time attending a VONA event, and overall I really enjoyed it. The event itself was held in a lecture hall at Berkeley City College, and it was packed with people. They had so many audience members that all the seats were filled, and they had to open up another room for overflow and simulcast the event there. The air had an electric buzz of anticipation as we were waiting for the reading to start. Among the audience members, I noted the collision of a sophisticated New York-esque vibe with the hippie, loud, radical political culture of the Bay Area. I don’t think I’ve ever been to a reading that felt so lively, and the readers pumped up the audience even more by delivering words that leapt off the page.

I also have never been to a reading that had so many writers presenting (there were fourteen faculty members who read), and at first I was worried that it was going to drag on. But once I started listening to what the writers had to read, I was lost in their words and didn’t even notice that a whole two hours passed by.

The Emcee, Jacqueline Luckett, did a great job of introducing each writer with a funny anecdote from their twitter feed or facebook profile. There were certainly common themes that many of the writers touched on in their readings of poetry, short stories, or excerpts from larger works. Since VONA’s focus is on promoting the voices of people of color, it was no surprise that many works poignantly explored the difficulties of facing racism on a daily basis and discussed the struggle of minority communities in the U.S. and in other countries. Some delved into the pain and heartbreak of violence as it tears apart families and communities, while others deftly weaved together humor and social critique.

Junot Díaz, the well-known writer of The Brief Wondrous Life of Oscar Wao (which admittedly I have not read yet) and one of the founders of VONA, was the star of the show, although I have to say I liked some of the other writers’ work better. Still, Díaz, who read from his novel This is How You Lose Her, probably projected the most outrageous persona out of all the writers, wildly gesticulating and swearing without recourse. After the first time he dropped the f-bomb while introducing his work, he admitted that he should have warned the audience, saying “I am a trigger warning.” It was quite a treat to hear him read.

There were so many great pieces from last night’s reading that I can’t possibly describe the all, but at the end of this post, I will list the fourteen authors in case you would like to look them up. I know I certainly plan on picking up some of their work after hearing them read.

My favorite poems from the night came from Patricia Smith and Andrew X. Pham. Smith’s poem was one of the most devastating pieces of literature I have ever read. I didn’t catch its title, but it reimagined an event taken from a newspaper headline about a man in New Jersey who throws his daughter into a sack and drowns her in a river. The event itself is shocking and heartbreaking of course, but the way Smith drew it out was unbelievable, using haunting language and wielding a harsh, powerful voice that just sliced through me like a knife. Her description of drowning made my own throat close up, and the way she described the man’s indifference… it gave me chills, and not the good kind.

Andrew X. Pham, who is a memoirist and food writer, read a fantastic poem about zooming down the California coast on the Pacific Coast Highway on a motorcycle after a heartbreak. At one point, the speaker sees families taking photo after photo at a lookout and the speaker remarks, “We are drawn to certainties even if they are boundless.” His imagery and the way he matched the feeling of speeding on the highway to that rootless feeling you get in your life when everything has gone wrong, it was magical.

We are drawn to certainties even if they are boundless.” – Andrew X. Pham

My favorite prose pieces were from Marjorie Liu and Faith Adiele. Liu is a fantasy author, so her writing was different in content than most of the other people’s. Still, she really captured the same tone that many of the pieces carried, one of fury against injustices. The selection she read was from her Hunter Kiss novels, which are about a woman with demonic tattoos and magical powers.

Faith Adiele is a travel writer, and the piece she read about one of her trips to Nigeria stood out to me because it overturned many of the travel writing genre’s expectations. She wrote about spending time with her father who had dementia and attending her brother’s wedding, and managed to find humor in that period of her life,without sugarcoating the stark reality of her father’s illness. She didn’t idealize the experience, especially when she discussed what happened when she consumed the wedding soup that her sister-in-law made. Let’s just say this particular piece of writing is not for the weak-stomached, but her descriptions of unsightly things made it all the more hilarious.

Below is the full list of all the people who read at last night’s event. I definitely intend on looking them up because what I saw last night blew me away. Also, I’m eventually planning on applying to MFA programs and many of the VONA faculty members teach at programs all over the country during the regular school year.

If you are interested in applying to the VONA/Voices Workshop, which is held durng one week in June, you can find out more information on their website: